If I Google "Free Fantasy Football Cheat Sheet" what will I get? Surprisingly, I only get organic results, that is, no sponsored results and the top-TWO results are ESPN followed by a RotoWire and then a FantasyPros cheat sheet. Only organic? No sponsored! That's really unusual and probably deserves another investigation at a later date. 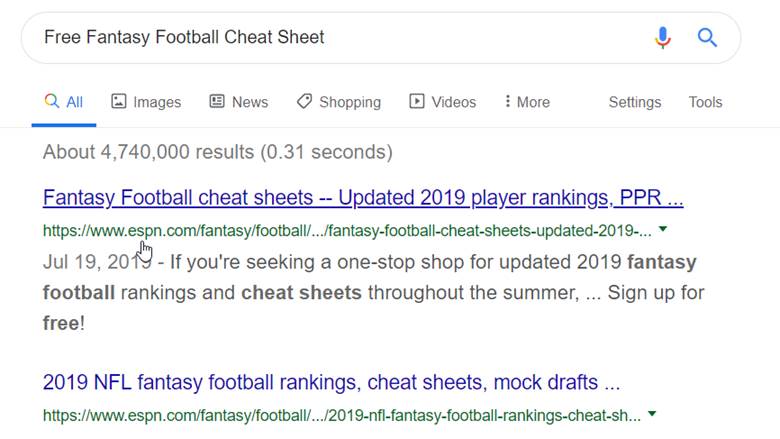 When I click through the first link I don't go directly to a ESPN cheat sheet; I go to "Fantasy football cheat sheet central" which is a bunch of links to news stories in the NFL. NFL news is not a cheet sheet (that's how they spell cheat in Port St. Lucie). There are links lower on the page to cheat sheet PDF, which I discuss below, but, first, what makes a good cheat sheet?

What makes a good cheat sheet? First, it should be a densely informative (no fluff) sheet that you can print. Also, obviously, you want to see an up-to-date average draft position, ADP, but what else do you need? First and foremost, everything needs to be custom tailored for your league because no two leagues are alike and 'little' differences in scoring rules and league configuration matter. Here is the rubrik for getting an A+ if they have these then that's great! So, lets start with the top of the search results:

On down the Google page and we get to RotoWire. I like Rotowire, I wrote an article about The Art of Fantasy Football Trades about a decade or two ago, reproduced here. Let's see what they offer for cheat sheets.