Many experts would have you think that there are magical stud and dud players. There aren’t magical players and if there were then it wouldn't matter much because most of a player's future doesn't depend much upon the player themselves. Any player projection and certainly Robocoach’s predictions should be based upon the following mostly non-player factors.

Note, only the last factor, injury risk, is specifically player related! Only one out of eight or a tiny thirteen percent of a fantasy prediction depends on the player! Even prior performance is predicted based upon a baseline for the player position (role) not the player. For example, RB1 for Carolina has a baseline performance per its history. “Wait a second,” some would say, “McCaffery didn’t play much last year so that baseline is irrelavant.” The baseline does need to be adjusted, that true, but it's not irrelavant. I’ll discuss that in detail, below.

Robocoach thinks studs and duds aren’t players, they are literal strategies that coaches devise. That might sound crazy because what coach would implement a dud strategy, right?

They do it all the time, for example, when the Patriots let Tom Brady leave. That was equivalent to saying we’re going to start a dud, relatively speaking, at QB. Sometimes the dud strategy is a risk taken by the coach when they choose to have an incompetent backup at a high impact postition like RB. Almost no RBs finish all the season's games, its just not done anymore, so you need a quality backup. On the flip side of the dud backup is when the stud returns. When McCaffery comes back, like he is this season then that is the stud strategy. We hope you agree that studs and duds isn’t something that just happens...it IS a coaching STRATEGY.

As a stud McCaffery pops up to the top ten. He’d be in the 30 to 40 range if he followed the Carolina RB1 baseline from 2020. He’d be even higher if not for his injury history, but I’ll discuss that below.

And these are the duds
That’s it. So far only two coaches have said, “I’m going to start a dud.” The Saints are going with Jameis Winston and Jameis, relatively speaking, is no Drew Brees. He will underperform the baseline significantly. You have to think of the position as the baseline, not Jameis’s performance as a Buc as the baseline. This is because the Saints offense still is there and with or without Brees it will do what it does, albeit a bit worse. The Saints could have grabbed a better QB off free agency, but they didn’t. It's a dud strategy, plain and simple.

As you can see, there is nothing mysterious about picking studs and duds. A dud strategy by the coach is perhaps because of good reasons, like the spending cap. A stud strategy is also plain to see.

In and Out of Committee

This is similar to studs and duds as it's also a coaching strategy. The coaches say ‘this guy can take the whole workload.’ That’s out-of-committee and again, it's not some player, in stud fashion, suddenly exceeding the baseline for weeks at a time. It's the coaches deciding to feed one guy the touches that used to go to the committee. Conversely, when the touches go from one guy to two guys you’re in-a-committee.

There are examples, some would point to players exceeding the position baseline for extended periods. Two big examples from 2020 would be Theilen and Robinson. If you take a closer look, however, it didn’t just happen. The coaches made it happen. Both players were given the spots and didn't have to share the workload in a committee.

So, who’s coming in and out of committee. Mostly it's announced by the coaches saying we’re going to distribute the touches evenly. Sometimes it's announced indirectly when the coaches lose someone in a committee and don’t replace him. One way Robocoach detects it is by the human ADP vs. Robocoach ADP difference. Robo sees when people are overrating or underrating a player. That’s an indication of committeeness or injury. Once detected, Robocoach adjusts the player projection. 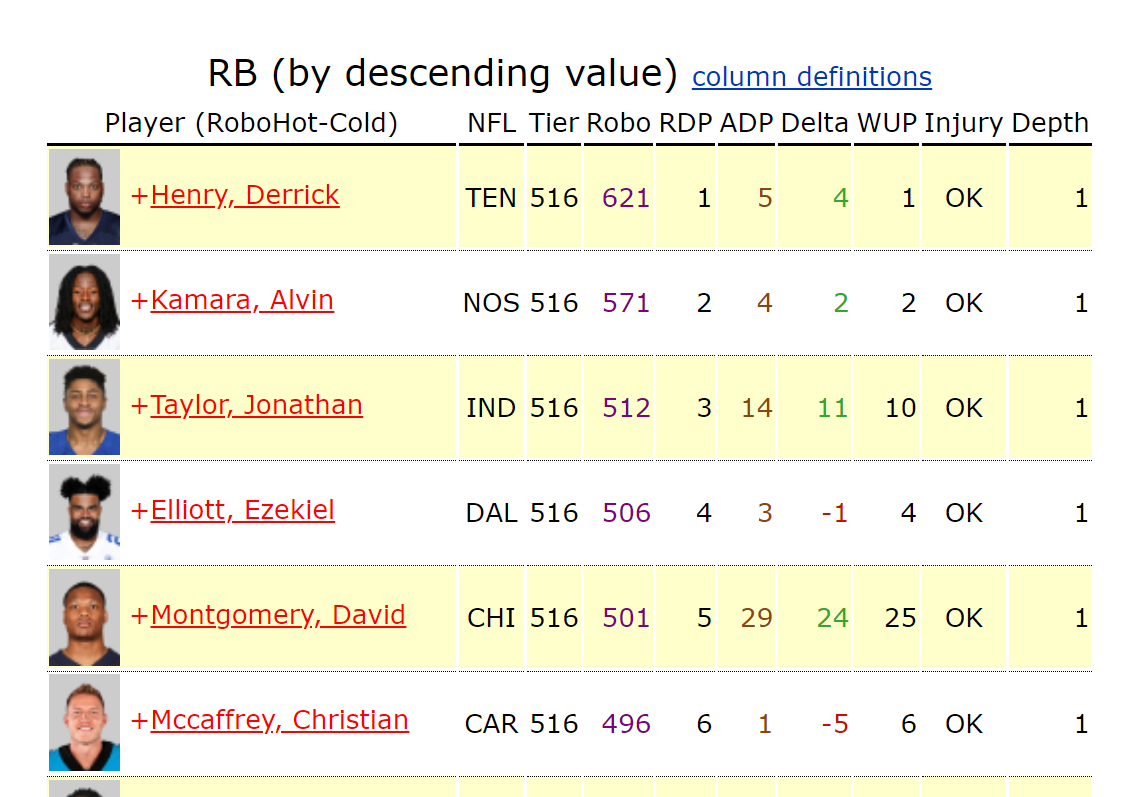 For example, see David Montgomery above in my pre-adjusted PPR Robocoach cheatsheet. His delta is high, indicating Robocoach thinks he’s better than his ADP. Why is that? Committeeness, as I’ll explain below.

If you click through on Montgomery, the first news listed is that the coaches are going to start sharing the touches more at RB so, it's committee time. Robo adds Montgomery to the committee list and a committee projection adjustment takes place.

Alternatively, in the same image above, you’ll see that Johnathan Taylor is significantly above his ADP. That's because he's in a committee, but he won’t get the committee adjustment. The coaches say he’s going to be in a committee so you’d think that Robocoach would downgrade his projection, but not so fast. Robo knows that Indy’s been in committee for a long time, so the baseline doesn’t need to be adjusted. Taylor will exceed expectations not because he’s a stud, but because everybody is overreacting to the committee ‘news.’ It's not news at all, it’s status quo, the hate has gone too far. These are the Strangelove players, or 'how I learned to love the committee' players.

No team is clearly coming out of committee, but keep an eye on the following:

This is the one factor, of the eight discussed above, that is player specific. Here are a few proven facts: overwork correlates with injuries. Injuries correlate with injuries. Think of the players that drive you crazy--the ones who try to play through injuries. They play in 10 to 13 games, but they are questionable and or doubtful often. Then there are the players who play in only a handful of games but keep saying they’ll be back. Robocoach downgrades these infuriating players. They’ve done it before and it is scientifically proven they will do it again. Below are the injury downgrades list, but you could just as easily call it the 'About to be Injured' List.

Some RBs don’t get injured at all and play in every game. You’d think this is good, but it's not. They’ve dodged a lot of bullets and eventually they’ll get hit.